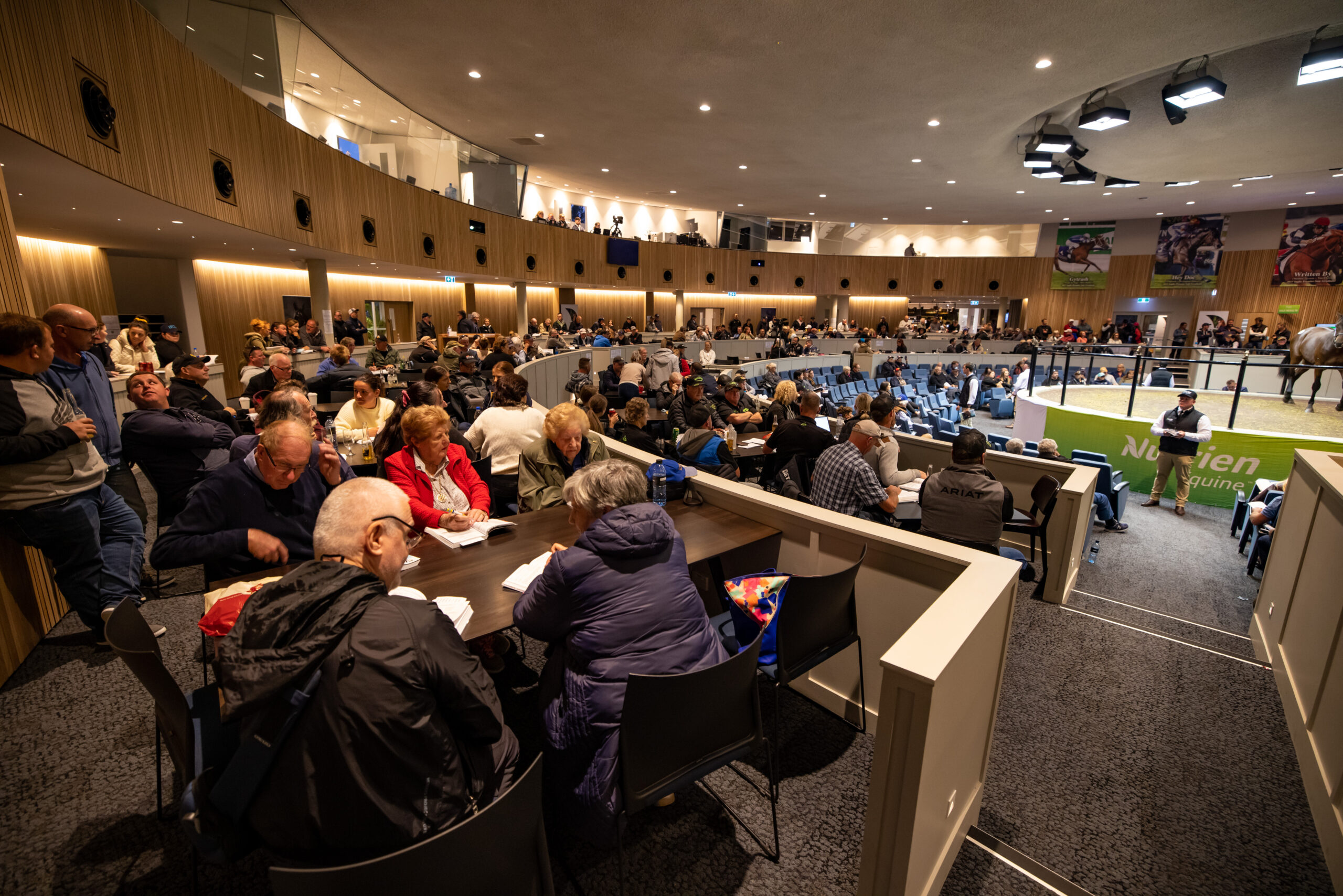 The New Zealand Cup is a truly great day of harness racing for the purist and to pinch a line from Banjo Paterson’s classic The Man from Snowy River “so all the cracks had gathered to the fray”.
While the New Zealand Cup is the highlight there is not an average race on the programme and even the maiden carries a $25,000 stake and is targeted by the best non-winners going around.
It takes a smart horse to win a race on Cup Day and the final event on Tuesday was taken out by the 3yo JOHNY ROCK colt NO TIME LIKE NOW which won his fourth race for the season and rated a career best 1:54.6 for the 1980 metres.

Lot 186 in the 2022 Nutrien Yearling Sale is a half-sister to NO TIME LIKE NOW being by former star juvenile VINCENT, who himself ran second as a 3yo on Cup Day in 2016, from the SOMEBEACHSOMEWHERE mare LIVE ON THE BEACH.
LIVE ON THE BEACH is a half-sister to three-time New Zealand Cup winner TERROR TO LOVE p,1:51.0 $2,429,978.
There are three Group One races held at Addington on Cup Day each year and one of the is the $150,000 Sires Stakes Final.
Lot 186 in the 2022 Nutrien Sale is named AIM TO PLEASE and vendor Joshua Mackison has this filly paid up for the New Zealand Sires Stakes Series along with the Nevele R Fillies Series.
Majestic Man Gains Another Group One Placing On Cup Day
Three-time Group One winner MAJESTIC MAN, a son of MAJESTIC SON, ran a gallant third in the Group One New Zealand Trotters Free-For-All on Cup Day to OSCAR BONAVENA and BOLT FOR BRILLIANCE.
The third placing lifted MAJESTIC MAN’s earnings to $596,000 and the 2022 Nutrien Yearling Sale will offer a three-quarter brother to MAJESTIC MAN in the form of Lot 24.
Being offered by GSM Racing Pty Ltd, Lot 24 is the first foal from the BACARDI LINDY mare ULTIMATE DAQUIRI tr,1:59.7 which is a half-sister to Majestic Man.
Lot 24 is by MAJESTIC SON and another half-sister to MAJESTIC MAN, in BET PRAY LOVE, produced her first winner at Invercargill on Sunday when LOVE IS EVERYWHERE was an impressive five length winner over KYLE LOCH.
Tuesday’s Group One for the trotters was won by another son of MAJESTIC SON in OSCAR BONAVENA and in fact sons and daughters of MAJESTIC SON have won a total of 35 Group One races in the Southern Hemisphere.
An absolute standout sire, MAJESTIC SON’s progeny have earned almost $2.3 million this season and he is assured of a sixth consecutive Leading Trotting Sire Award in Australia.
The 2022 Nutrien Yearling Sale has 13 yearlings (7 colts and 6 fillies) by MAJESTIC SON so potential purchasers have plenty of options.

On Tuesday night at Northam in Western Australia the 3yo BETTORS DELIGHT gelding BLITZEMBYE won his third race from four starts in the State since being brought from New Zealand.
BLITZEMBYE rated a career best 1:57.6 over the 2190 metres at Northam for trainer Mike Reed and driver Mark Reed and the win was his fifth in 12 career starts and lifted his earnings to more than $34,000.
Earlier in the day his 10yo full-brother ALOTBETTOR p,1:49.6 won his 35th race when he won a $29,000 Claimer at Yonkers in New York for trainer Deborah Daquet and driver Jason Bartlett.
Alotbettor now has earnings of $446,457.
Lot 119 in the 2022 Nutrien Yearling Sale is on account of Janet Argus and is the first foal from ALL INFLIGHT p,1:56.2.
ALL INFLIGHT is a full-sister to both ALOTBETTOR and BLITZEMBYE being by BETTORS DELIGHT from the FALCON SEELSTER mare FALCONS FLYBYE.
Lot 119 is one of 16 yearlings in the Nutrien Sale by ALWAYS B MIKI whose brilliant first crop 2yo son FRANCO INDIE won the Group One New Zealand Sires Stakes Final on Cup Day downing FRANCO MAC and REPUBLICAN PARTY.

It was FRANCO INDIE’s fifth 2yo win this season in just six starts for the training partnership of Mark Purdon and Hayden Cullen and lifted his earnings to $124,450.

ALWAYS B MIKI has already sired a pair of millionaire pacers in North America from his first crop which are current USA 3yos and he is currently Australia’s Leading First Season Sire in 2021.

Thank you to Alan Parker for this great sneak peak updates.
WE are really looking forward to bringing you the full online catalogue very soon.
Watch this space!
Mark Barton 0419 488 256